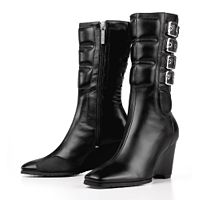 Whether you ride a chopper, a crotch-rocket, a dirt-bike (or even a Schwinn), you want to make sure your body is protected with the proper clothing, head-gear, and footwear.   But even if you’re not interested in getting on a bike, you can still take advantage of the many great fashion trends that have been inspired by biker-wear.   And motorcycle chic is totally in this season, especially when it comes to shoes.   So if you’re looking for something that makes you appear to be the butt-kicking babe that’s been waiting to break out, here are just a few hallmarks of the look that you can strap to your feet.   Just because these boots aren’t made for walkin’ doesn’t mean you can’t rock “˜em!

1.   Leather. This is a staple of motorcycle boots is that must be observed.   Let’s face it; other materials simply won’t provide the same protection and thus, do not offer the right look.   And while black is the predominant color, you can stray a bit in this regard.   Brown is pretty blah, but some of the season’s hottest biker boots come in metallic leather (silver, bronze) which sets just the right tone for anyone who wants to walk the fine line between function and fashion.

2.   Height. Short boots just aren’t going to cut it, and if you follow trends, you know that booties are SO last season!   If you really want to rock the biker look when it comes to boots, you’re going to have to go high.   Of course, over-the-knee might be a bit much, especially if you are actually going to hop on a hog and ride off into the sunset (necessitating a lot of knee-bending), so opt for something around the mid-calf to knee range.   And if you don’t feel like fiddling with all those laces, cheat a bit and get a pair with a hidden zipper (so you only have to lace them once!).

3. Sole. There is some contention on this matter.   Most biker boots are heavy with a thick, rubber sole.   But women who aren’t riders may not want all that extra heft.   On the other hand, it might not look right without the heavy heel.   The best you can hope for is a compromise, and designers have sprung to the challenge.   The hottest boots this season go for a lighter heel with a little lift (a chunky, 1-inch heel), which looks more like a (horseback) riding boot.   However, with the right accents elsewhere on your footwear, this oversight is barely noticeable.

4. Buckles. While the buckles and straps on real biker boots are purely functional, the look is a great way to spice up the trend and make your boots a bit more funky and fashion-forward.   Instead of going for the traditional two-buckle top, look for boots that have buckles all down the back or a strap that criss-crosses at the ankle and buckles on the side.   Just beware of overkill ““ too many straps equals emo or goth.

5. Metal. Steel-toed boots are great if you’re working a construction site, but when it comes to accenting your boots, a metal plate won’t do much good hidden in the toe.   Some of the greatest boots this season feature riveted plates on the front face of the shoe, like a shin-guard.   This will add some panache to otherwise lackluster kicks and give you the fashionable footwear you’ve been looking for.

Sarah Danielson writes for Jafrum where you can find a great selection of biker gear including motorcycle rain gear, boots, jackets, and many other clothes and accessories.